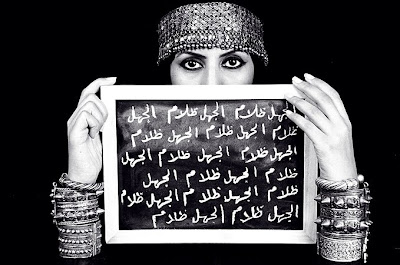 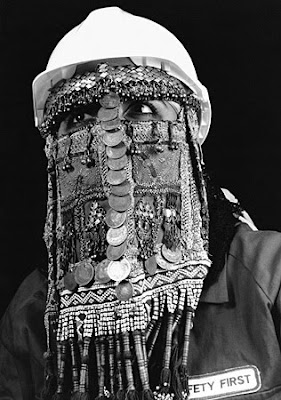 Our previous post on Shadi Ghadirian brought to mind another female artist whose work deals with female identity and their struggle to find balance within a conservative muslim country. Manal Al Dowayan's series I Am... shows women in a what are often gender associated roles. In the image I Am A Petroleum  Engineer, Al Dowayan photographs a woman in hard hat and uniform but with her face hidden behind a beautifully ornate burqa. This is Al Dowayan's attempt to visualize the beauty she finds in tradition as well as her desire for more gender freedoms. The image of the steering wheel grasped by a woman's arm in The Choice echos this sentiment.
Al Dowayan has lived for most of her life in a semi-enclosed camp in Dhahran ( Eastern Province, Kingdom of Saudi Arabia). Her outward persona therefore is different depending on whether she is in the relative freedom of her home,  in the lesser but still more than typical freedom of the compound, or in other areas of Saudi Arabia where she is held to the same laws as other women. It is this lifestyle of degrees of tradition/modernity and conservatism/liberalism that feeds Al Dowayan's photography.
Al Dowayan will be part of Edge of Arabia at the 6th Berlin Biennale 9th June – 18th July 2010. 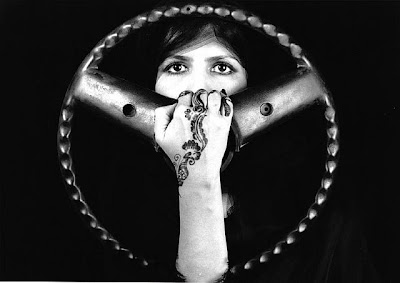 GMEP is always looking for photography to showcase. If you have work (or work to recommend) that is from or about the greater Middle East, please email us at middleeastphoto@gmail.com