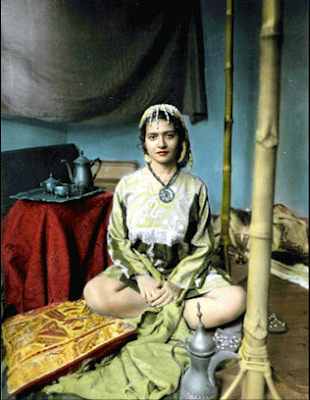 Damascus born photographer Osama Esid has many series worth discussing. Cairo Street Workers is an obvious choice for immediate impact. Setting up a portable studio in the streets of Cairo, Esid invites workers in to take part in this body of work that transports them to another time through the combination of classic studio backdrops and hand coloring the images. These workers are transported from obscurity, to being the focus of our attention. In Cairo Street Workers, the people become timeless, appreciated and individual, rather than the anonymous army working some of the dirtiest jobs that, sadly, they are in real life. Like the rest of his work, this work also plays with stereotypes that Esid considers can be beautiful and enriching as well negative as commonly believed.


For Esid that image of Orient constructed by the West also penetrated the East, "the oriental fantasy exists on both sides". Furthermore and here is where Esid’s motivation and inspiration lies, one can inquire into a stereotype to create new interpretations using its own language and mechanisms and feeding on those same inner contradictions, without needing to pigeonhole a culture.

Thus in the "Orientalism and Nostalgia" series, Esid reconstructs a theatrical period scenario but displaces it in full XXI century in one of the most important capitals of the region, Cairo. The aim of each piece is to acquire the atmosphere of those old vintage pictorialist photos, where beauty becomes the main protagonist. He highlights the more sensual side of Orientalism, referring to those essentially feminine spaces which also remind us of French XIX century painting. He retrieves the sensuality and eroticism in the gaze and enticing pose, although endowing his women with a defiant intensity, no longer passive and complacent, but on the contrary women who are in control of their bodies and their destinies. 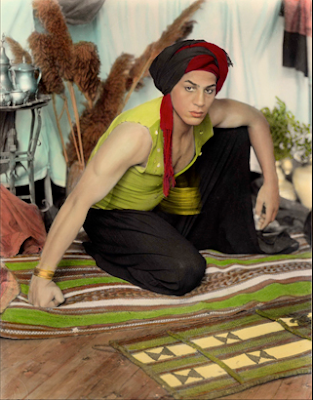