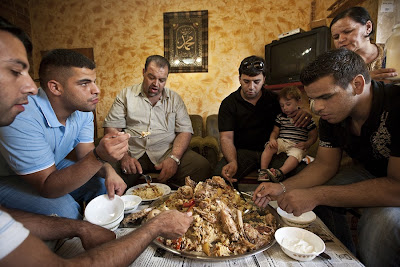 Natan Dvir has a great series called 18. The premise is that he- Jewish Israeli man -uses himself and his camera to look at the Arab/Jewish coexistence by inserting himself into the lives of "...Arab men and women at a crucial point in their lives - turning 18 years old."
There is an interview with Dvir and Rania Matar by Susan Burnstine on fstopmagazine.com that connects the similarities in some of their work.

His statement explains his project best:

While Israel is defined as the Jewish state, over a fifth of its population is
Arab (Muslim, Christian, Druze and Bedouin), consisting of hundreds of thousands
of families whose ancestors settled Palestine and stayed within its borders after
Israel was established in 1948. This large minority is currently experiencing a
challenging identity crisis. Despite the critical role I believe this society will play in
determining the future of this region, it has somewhat been forgotten amidst the
Israeli-Palestinian conflict.
Although I grew up in Israel and spent most of my artistic career
photographing its citizens, I felt I did not really know or understand this society.
How do Jewish and Arab cultures with their interconnected history perceive one
another? Who are the Arab people living in Israel and how are they different from
the stereotypes and circulated media images? What is the contemporary status of
the Arab society in Israel and what are the pressing issues it is facing? In this
highly political environment I became interested in the human stories of these
people living as a minority in a country defined by its majority religion.
Wishing to examine forward-looking aspects of this Arab-Jewish
coexistence, I decided to focus on Arab men and women at a crucial point in their
lives – turning18 years old. At this age they graduate from school, become legal
adults, and gain the right to vote as Israeli citizens. Yet unlike their Jewish peers,
most do not join the military. As they start their mature life in Israel many face the
dilemma of striking a balance between their relatively traditional culture and a
modern lifestyle. Family structures and gender roles are evolving with increased
availability of higher education and paying jobs for women. Living in an area of
conflict, many are politically aware and express concerns about being able to
study, find work, and attain financial stability in a country they feel is discriminatory.
The project Eighteen includes a series of photographic profiles collected
during my personal journey exploring the Arab society in Israel. I aim to confront,
and dispute the widespread misconceptions of the “other”, the people within my
own country who I was brought up to consider more as foes rather than as allies. I
faced a unique challenge of photographing and portraying my so-called “enemy”,
and in doing so hope to highlight the impact that cultural and internal conflict have
had on these people, personally and collectively.
As a Jewish Israeli man, I expected most of my subjects to regard me with
suspicion and distrust. I chose to photograph them in their close surroundings
wishing to present the pictures with a sense of place and attempting to reveal the
social context within which they live. Personal testimonies presented alongside
each of the portraits allow an initial understanding of their background and create a
more intimate space between these individuals and the audience.
The essence of these images, however, does not lie in their aesthetics, but
rather in the complex dynamics that take place between the sitter, the artist, and
the viewer. While photographed from a close distance in intimate environments,
my subjectsʼ often-unwelcoming expression and body language testify to the
complex nature of our engagement.
The hostility and suspicion that I expectedly felt at the beginning of most of
my encounters were soon replaced by interest, curiosity and hospitality. The
candid pictures photographed after the portraits reflect this transformation and
allow an intimate view of this generation. By combining these images with the
portraits I try to interfere with my audience instinct to regard my subjects as the
“other”, allowing a more complex and intimate viewing experience and reading.
Eighteen is an artistic point of contact serving as an invitation to get closer.
A project aimed at reconciliation by understanding and respect. An inside view by
one who is typically regarded as an outsider. If I, a Jewish Israeli man, have been
accepted and was allowed into my subjectsʼ personal lives – so can other. 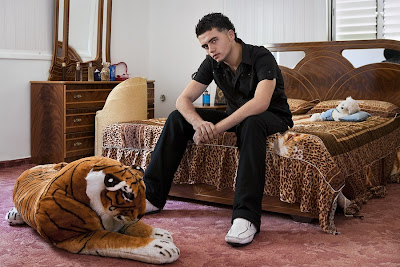 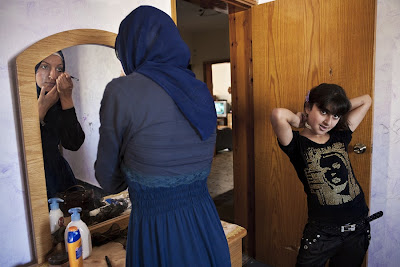