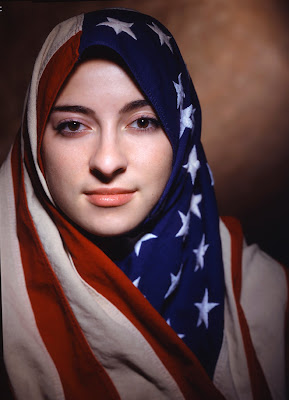 There are as many types of women who wear a veil as there are who wear makeup or high-heeled shoes. This is what Boushra Al Mutawakel -considered by some to be the first Yemeni professional female photographer -wants to explore in her veils series.
Aware of the regularity with which the veil is investigated or used as icon in art from the Arab world, Al Mutawakel had reservations about exploring what has become such a powerful symbol to this region and to the west. Though directly associated with the Arab world and Islam, it would be wrong to attempt to narrowly define the veil. Hijabs are worn by believers, and sometimes also by non-believers. They are strong women, weak women and everything in between. The veil may be worn by choice, or by obligation. Some wear occasionally, and some exclusively in public. What Al Mutawakel hopes to highlight is that under the veil, women are individual and varied, and to a culture that includes the veil, there is both good and bad associated with it, and there are lovers and haters of the now loaded garment.
As Al Mutawakel wrote in one of our email exchanges, "In this ongoing project I want to explore the many faces and facets of the veil based on my own personal experiences and observations:  the convenience, freedom, strength, the power, liberation, limitations, the danger, the humor and the irony, the variety, cultural, social, and religious aspects, the beauty, mystery, the veil as a form of self expression, protection, the veil as not  solely an Arab Middle Eastern phenomenon, trends, the politics of the veil, the fear in regards to the veil, and so on.
I have very mixed feeling on the hijab and the veil...there are certain aspects I like and others I don't. I don't think it is black or white. It is a dynamic complex topic. I also want to be careful not to fuel the stereotypical widespread negative image most commonly portrayed about the hijab/veil in the Western media. Especially the notion that most or all women who wear the hijab/niqab are all weak, oppressed, and backwards."
Al Mutawakel ends our  recent exchange with "I hope to challenge  and look at both Western and Middle Eastern stereotypes, fears, and ideas regarding the veil." 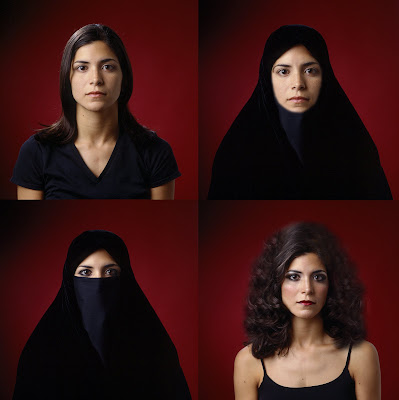 Sequence News published this video about Al Mutawakel and her work dealing with veils. One thing that strikes me as interesting in it is the pride with which Al Mutawakel views the 'abaya Barbie'. To Al Mutawakel, Barbie seems to be a symbol of the west, perhaps of the power of women, the freedom of fashion. Ironically, Barbie has fought a reputation of being anti-feminist in the country where she was created. She is associated with the promotion of unrealistic body image, and, though they have fought it in more recent years, Mattel has been accused of sexism due to the abundance of pink vehicles, nurses uniforms and bikinis they have sold to accessorize the legendary doll. I suppose views on Barbie, just as on the veil, are a matter of perspective.

Editors addendum
After publishing this post, Al Mutawakel sent me an email, part of which said:
"Also I wanted to make the correction regarding the doll. It is called Fulla, not abaya Barbie and is produced by New Boy not Mattel. Although someone who had done an article about the Fulla doll, said based on his research it turned out both dolls were made by the same manufacturere. Also, I am not necessarily a fan of the Barbie doll (although I had several as a child), especially the distorted and unrealistic body image it perpetrates. Because Barbie is such an iconic doll, and one that has such tremendous success both in the US and internationally, that i felt it was great that Fulla was the Middle Eastern version of the Barbie, doll, providing girls from the region another choice or an alternative, something that was more representative of them (as opposed to the super skinny, large busted, blonde blue-eyed doll). It is actually really interesting that the Fulla dolls come with permanent long underwear, and have slightly more realistic body dimensions....ie: much smaller bust, and larger waists. I didn't feel that that point came accross in the feature. I hope I was able to clarify myself."

For additional reading, there is also a Q&A from the Yemen Observer here.