Daydban, Sy and Meer at MENASA 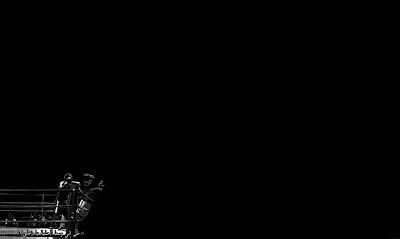 A friend of GMEP is visiting Beirut for the MENASA (middle east/north africa/south asia) art fair and has been filling us in on the what the organizers are referring to as "year zero" of the fair. Meant to be a soft launch for the larger fair planned for next year, it will remain in Beirut but will move to a larger venue. The MENASA was a slightly conceptual approach to international art fairs in that it was themed on the idea of one artist and one work for each of the thirty or so participating galleries.

Though a small fair in terms of works and artists presented, the quality of work was high and it was great to have a chance to speak to Saudi artist mentor and Athr Gallery co-founder Hamza Serafi who was showing a work by Ayman Yossri Daydban. With only a few contemporary galleries in Saudia Arabia, it's important to hear what it's like from the inside looking out rather than the other way around. According to Serafi, who is enviably nimble in expressing the state of art and politics ...and religion, in a country most of us mainly identify with Mecca, the Haaj and enourmous amounts of oil and sand. Speaking of what he suggests to artists represented by Arthr Gallery, Serafi offers, "I tell them, rather than trying to break through the barrier, it is better to jump over it..." Good advice regardless of where you live.

The Daydban piece hanging in the Athr booth was one that -especially being a boxing fan- instantly resonated. The backlit duratrans of a still from the legendary Foreman vs Ali fight was instantly recognizable even though stark black and white and pixilated in a way reminiscent of earlier video games. "Subtitles" -the series which this untitled work is taken from, and some of Daydban's other work (the maharam, or tissue boxes for example) rely on arabic text which interacts with the image. The text in the Foreman vs Ali work says "move to the middle of the ring Ali." About the Subtitles work, Daydban says,

"The basic function for the arabic language associated with a foreign language film shown on the screen... is translation. It works in the context of the film as a narration of the story and an explanation of the action that accompanies it. ...and thus the meaning of the picture precedes that of the language and specifies it.
The language, when deducted from its cruel context and re-exported with the image of the new still captured photo, changes its function from confirming the meaning to producing it, by transforming itself to a unique source of new mental images with no past or function."

The booth of The Empty Quarter had one of the more substantial feeling exhibits, showing the  series Not For Sale by Hady Sy presented as one enourmous piece. The series is an X-rayed collection of the most commonly used guns in the world and/or guns made famous by their association with famous murders. The clinical approach used to photograph the guns creates what essentially looks like a sales catalogue - which returns us to the title Not For Sale. Though the text associated with Sy is sometimes a little indulgent, this work, as well as In God We Trust speaks for itself -and speaks volumes.

Omani photographer Hassan Meer (not to be confused with the singer by the same name) was also present at the fair with the gallery representing his work in Oman Bait Muzna Gallery. A very well known artist in Oman, Meer has been exhibiting more frequently further from home, though mainly still within the middle east so far. Though his reputation was made in painting, Meer does not limit himself to the medium, but rather chooses the medium most suited to how he wants the work to unfold, whether with paint, video or photography.

It was his newest work which is photo based which was on display at MENASA. As Meer explains it, in the seventies it was suddenly possible for women be photographed at the photo studios opening up in Oman. These images began appearing in his childhood and are now looked back upon with nolstagia. The women in the photos wear their burqa's in the photos and while another iconic symbol of the muslim world -the crescent moon- provides both seat and setting for the women. Caligraphy and arabic text figures often into art of the region and it becomes the third constant in this series - again, hinting at nolstagia.

Meer has not left painting behind for good, but the work he is currently creating is again photo-based so we expect to feature his work in more detail in the not so distant future. 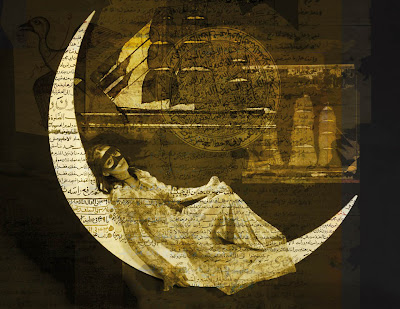