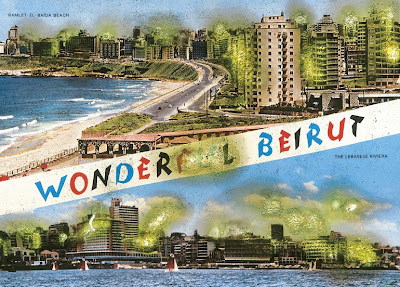 In 1968, Abdallah Farah was 16 and working in his fathers photo studio -Studio Wahed -in downtown Beirut. The studio was asked by the Lebanese Tourism Agency to photograph the most beautiful places in Beirut for a series of postcards meant to idealize and the promote the higher end hotels, the modern infrastructure, and the character and charm of the city.
On behalf of Studio Wahed, Farah photographed the beaches, the souqs, the hotels, and, with the help of the tourism agency and the army, also took aerial shots of the city. Reprints of these postcards can still be found in Beirut, and, though often imitated, they have distinguished themselves among Lebanese postcards.

Studio Wahed was destroyed when civil war broke out in 1975. Farah rescued some negatives from the studio -notably the postcard negatives. As the city was being destroyed around him, Farah began to inflict similar harm to the original negatives of his postcard project. Bit by bit he held them to flame and burned and melted them, scarring them as his city was being scarred. According to the filmmakers/teachers Joana Hadjithomas and Khalil Joreige from Abbout Productions, "He imitated the destruction of the buildings he saw gradually disappearing because of bombings and street battles. He began by doing so in a highly organized and documented way, following the trajectory of the shelling and defacing the images to parallel the events of the day. ...Later, Abdallah began inflicting, accidentally or deliberately, additional destructions to those same buildings." These negatives now became new images, rather than damaged originals. They reflected a time in the history of Farah's city that he did not want to see forgotten or disguised by selective memories and pretty postcards.

Hadjithomas and Khalil curated Wonder Beirut around three stages of Farah's images. The first being the original postcards, the second  -the intentionally damaged postcard images, and lastly... and this is astounding... "a series of latent images that Farah has been taking -but not developing or printing -since confined to his home during the 1975 fighting. As Hadjithomas and Khalil describe it, while sheltering, usually in his home or a bomb shelter, "He used the un-shot rolls of film salvaged from his studio; but, short on products, fixatives and most of all, paper, he was not able to develop his images. The photographed films began to pile up, waiting for a better day, for a moment when the shelling would stop and Abdallah would be able to go out. Since -and despite the end of the war -he maintains this habit. He doesn't develop his images anymore. It suffices just to shoot them. The reels accumulate, without him feeling a need to reveal them. He nonetheless precisely documents each photograph he takes in a small notebook, describing it thoroughly. They are there to be read, leaving an immense space for the imagination. He entitles this work the 'invisible images' or the 'image in the text'." 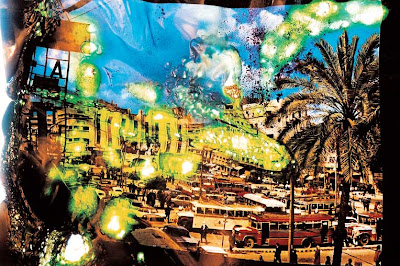 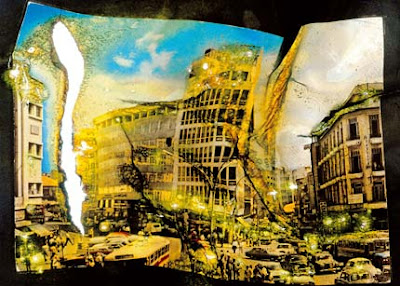